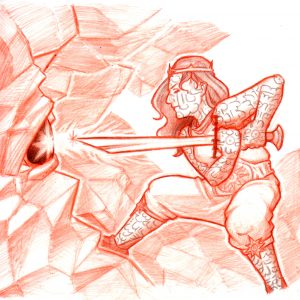 Though this scroll is still being translated, there is strong evidence that it details the legend of Regan Sol and her fight against the mighty beast Heltere.

The legend goes that once the sun beast, Heltere, came down from the skies, Regan Sol, the leader of Solidad, stepped forth to take him down. Heltere boasted that he could not be destroyed for his mother, the Sun, would restore him, healing any wound he received almost instantly. Regan Sol, being as stubborn as he, covered her body in a protective spell and took him on. The fight raged on, with Regan Sol eventually scoring a blow that knocked the beast out.

From here the legend varies. Some say they were both destroyed. Another tale goes that Regan Sol did die, but a shard lodged itself in her arm, giving her regenerative power and immortality. Another track of this legend states that Heltere was sealed underground and his occasional shifting in his sleep is the cause of earthquakes.

How does this relate to the leviathan? Well, we’re thinking that each region likely developed their own interpretation of whatever event occurred, therefore the true story must have morphed over time.